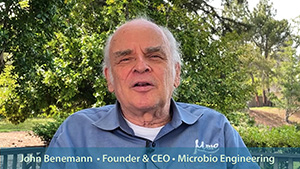 Summary: John Benemann is well known in the microalgae industry, a career spanning 50 years. John is the Co-Founder and CEO of Microbio Engineering. As a renowned conference speaker, he has a lot to say about the state of the microalgae industry and its future. John has been involved with spirulina for many years, and describes its advantages as an easy-to-harvest filamentous algae. On its future he asks will spirulina become lower cost with scale up of production and solar drying? Will large markets beyond specialty products open up for algae proteins and aquaculture feeds? At the same time, John sees potential for much smaller scale production with the experience in France.

John Benemann is well known in the microalgae industry, a career spanning 50 years. John has founded microalgae biotechnology companies and is a founding director of the Algae Biomass Organization and the European Algae Biomas Association. He’s author of numerous publications. A consultant to us and international government agencies and companies. For the past decade, John has been Co-Founder and CEO of Microbio Engineering. And as a renowned conference speaker over many years, John has a lot to say about the state of the microalgae industry and its future.

Q: John, what inspired you to get into algae?

Well, before I was working on algae, I figured that in the future, we would need protein and protein comes from nitrogen, and then I started nitrogen fixation in algae.

Q: When you look back what were some of your most important contributions?

Really my work was to start on wastewater treatment with algae and wastewater treatment for nutrient recovery, for treating wastewaters for recovering the value of the phosphorus, of the nitrogen, and of the energy in wastewater. And I started working with professor Oswald at Berkeley almost 50 years ago, and he showed me these large pond systems, hundreds of acres. We worked on maximizing the production of algae on wastewater using paddlewheel mixed raceway ponds, which we first introduced.

Q: What were the biggest challenges you faced?

Oswald said, well, we don’t really have a good way of harvesting them cheaply. So I said, okay, how about growing filamentous algae? Filamentous algae are relatively easy to harvest. And so he said, oh, that would be great. How would you do that? And basically we have been trying ever since.

Q: With what you’re doing with Microbio Engineering, what’s the most exciting thing that’s going on right now?

We’re working on filamentous algae that contain EPA, a very important product. Right now, more than 90% of all EPA in the world comes from fisheries. And that is a depleting resource. We have some very nice EPA products on the market now from nannochloropsis, but that’s not at low cost product. So a filamentous algae containing EPA is certainly important.

One of the big advantages of spirulina is that because it’s filamentous you can very easily harvest it with screens. Tribonema that we were growing the filamentous algae for EPA, we could almost harvest with your, with your hands. It’s a low cost way to harvest.

Q: What are the most important things that new people, students, researchers, entrepreneurs, investors should know about getting into algae?

There’s of course, a huge amount of information. Unfortunately also there’s a lot of misinformation. A lot of people make claims, say things which are not necessarily, shall we say, practical. So the first thing that you need to do is don’t believe everything, but don’t question everything either. You need to study and see what is actually possible and go from there.

Q: What to you would be the most exciting anticipated and impactful development for spirulina?

The real question is, can we go into lower cost, larger scale production? Right now, spirulina sells for 10 or more dollars per kilo, and we need to get the price down. What that means – scale up is a very important factor. Drying is still an expensive proposition. So we need to figure out how to do solar drying, if possible, or other ways of using waste heat.

Q:Do you think in this decade, that’s going to happen?

Well, if you had asked me last decade, I would’ve said yes. And they were before I would’ve said yes, but depends on two factors. One of them is the market. You need to also have somebody to come in and say, we want to sell spirulina for aquaculture feeds or for animal feeds or for human consumption instead of just being a specialty product. And they have to invest in large scale production, which is gonna be a challenge of course, but I think it’s possible, but it’s not a sure thing.

There’s a real potential for doing much smaller scale production. The experience in France, for example, where people are growing in essentially small systems and even your own personal consumption spirulina. So there’s a lot of different ways of approaching this problem.