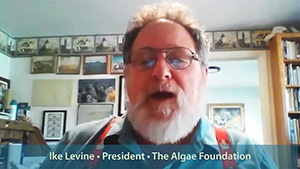 President & Board Chair • The Algae Foundation

Summary: Ike Levine has been in the microalgae and seaweed business for decades. He owned one of the largest seaweed farms raising prophyra. As a professor of algae, Ike has focused on inspiring the next generation. He founded The Algae Foundation, reaching hundreds of thousands of students in the USA and internationally, created the Algae Prize and the Algae Academy, a K12 effort, all about changing perception of algae from ick to awesome. Ike recalls how many spirulina microfarms there are in India, many operated by women. He hopes algae can be a part of many American farms, including spirulina microfarns. “Algae can play a major part in saving the world… take a deep breath, and thank the algae.”

Q: I’m talking with Ike Levine, who’s been in the microalgae business for a long time. What were some of your accomplishments that got you to where you are today?

Well, I was really fortunate to study under some of the real giants. I’ve had one foot in the applied algal world and one foot in being a professor of algae. I owned the largest seaweed farm, actually the largest algae farm, but I don’t think there’s been an algal farm larger than 123 acres. So in the 1990s in Canadian waters and Maine, we raised prophyra, both for Nori sheets, but also for r-phycoerythrin, a red pigment used in cancer therapy. But we had to close the farm because of water use conflict.

I’ve had the great opportunity to do both micro alga and seaweed farming, to really learn the art of algae farming as well as the science. So merging those two has really been the joy of my career. In the last nine years, a group of us started the Algae Foundation’ an offshoot of the Algae Biomass Organization, which was a trade organization.

The professors who were part of that board wanted to do more about education. We’ve reached 160,000 students in a hundred countries and all states of the United States. And we just started the Algae Prize. We’re down to 15 finalists out of 60 teams and almost 400 students. $130,000 in prize money. And the amazing thing is of the 15 finalists, there is zero overlap. I mean, we have seaweed, microalgae, production, processing, ecological services, genetics.

It’s an amazing array of ideas. It’ll be a great mentoring and networking opportunity for the young people to meet the movers and groovers of the algae academic world, as well as the commercial world. It’s all about building skills of these young people to make them more successful.

Q: Where do you see it going in the next five years?

Well, our Algae Academy, which is a K12 effort, we’ve reached over 130,000 students. I would like to be in every school district, if not every school in America. Presently we have two online loops, Masters open online courses that can be found on coursera.org. These are free college level courses. We’ve had about 27,000 students take it. Well, the algae academy is all about changing young people’s perception of algae from ick to awesome. There’s a real opportunity to affect global climate change and poverty and rural disadvantages and deforestation. Algae can play a massive role.

Q: One of the other programs that has been very successful is the Federation of spirulina growers in France. There’s 120 or more spirulina entrepreneurs all over France. They’re also putting out that word as well.

Well, it’s amazing how many micro farms there are in India. I’ve been in some of the ashrams just north of Pondicherry, where with zero electricity and 10 women, their productivity is 11 grams per meter square per day. In terms of Spirulina that matches some of the highest reports in the world and their Spirulina is famous all over the world. So the effectiveness of spirulina microfarms.

We have formed a partnership with the Future Farmers of America. What we’d like to be able to highlight to them is the ability of algae and American farming to merge. Algae should be part of many farms, including spirulina microfarms.

Q: When you look at the microalgae industry, one of the issues is getting costs down. If spirulina costs $10,000 a ton, and it’s been that way for quite a few decades, how do we get down to $2,000 a ton where it’s competitive with other protein sources?

I don’t have personal information on how to reduce the prices for spirulina, but spirulina is such a super food. You know, if you look at the tonnage that is sold presently, it obviously has remained successful despite high price.

Q: Do you involve algae in your personal life? Is it on your menu?

I have three grandsons under the age of four. I test out on them all different flavors of algal strips and they consume it, you know, they gorge on it. I also had a sushi catering company. And so, algae was a part of our home life all the time.

Q: If you were putting up a billboard anywhere, what would you say about algae?

The power of algae to transform the human condition. Do I think algae can save the world? I think it can have a major part. And so I always end a conversation by asking someone to take a deep breath and then … thank the algae.