Spirulina growing systems for home and backyard
Over the past 30 years, many people have asked they can grow algae themselves in their own back yard. One of the most common requests has been “How can I grow my own algae?”

In Richmond, California, by san Francisco Bay, Robert Henrikson, CEO of Smart Microfarms, has been developing a series of simple scalable platforms. Robert was a founder of Earthrise, which became the world’s largest spirulina farm in the 1980s, still producing today as Earthrise Nutritionals in Imperial Valley California. Having pioneered big commercial farms 35 years ago, the time has arrived for small scalable algae systems.

2:08 minutes. A demonstration of simple home and backyard systems for growing and harvesting spirulina (2012). 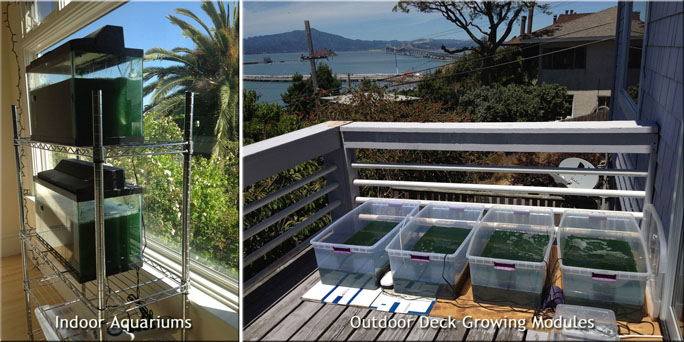 Aquarium tanks by the window and ouydoor modules on a deck overlooking San Francisco Bay.