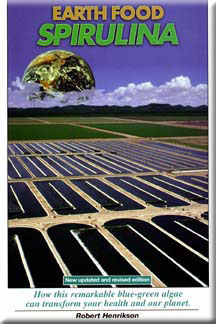 Health World Magazine
“Robert Henrikson has been a pioneer in researching and cultivating spirulina. Now he has written this informative handbook on the rediscovery of this wondrous algae, which has been on this earth (but much neglected by man) for 3 1/2 billion years. Readers can find the data obtained by scientific research in this book. If you wish information on spirulina, this book will be very helpful.”

Today’s Living Magazine
“Because of its remarkable health benefits, algae is now one of the fastest growing food trends. Aside from personal health, growing algae for food and biochemicals is better for planetary health than conventional food crops. Earth Food Spirulina is a complete guide to the blue-green algae spirulina and describes valuable self-care strategies using the algae as a supplement. It explores potential medical applications now under intensive research by scientists in Japan.”

Whole Like, United Kingdom
“Henrikson’s work, typically American in style, is packed full of facts and figures and for those interested in spirulina, it is a very interesting book. For those who have yet to hear of the great potential spirulina has for both the mis-nourished of the developed world and the mal-nourished of the underdeveloped world, this introduction to the subject will be an eye-opener.”

Health Foods Business
“Whatever we think of using algae as a food source, we usually call to mind the macroalgae – seaweeds – which the Japanese harvest from the saltwater oceans. Rarely do we think about the microalgae, those small algae which grow in abundance in freshwater streams and ponds. Among these microalgae is a species known as spirulina, and it is to this blue-green filamentous algae that author Robert Henrikson has devoted his book Earth Food Spirulina. Henrikson believes spirulina and other algae will play a significant role in relieving world hunger and reversing the environmental damage caused by soil and water contaminating chemical fertilizers. Using some 90 photographs, tables and graphs, Henrikson describes how spirulina can be used as a safe nutritious food supplement. He also delves into the potential medical benefits of the algae.”

Whole Foods Magazine
“Earth Food Spirulina is a guide to the blue-green algae described as an important supplement for millions of people around the world. The book shows how spirulina is grown in aquaculture systems in comparison to the reported inefficiency of conventional agriculture, how malnourished children in the Third World are fed, and why NASA is testing spirulina for space stations.”

Earth Star Whole Life New England
“The book reviews the history of the rediscovery of spirulina and updates the research on spirulina’s nutritional and health benefits. It includes detailed clinical studies. A photo essay shows how spirulina is cultivated. A separate chapter lists the variety of spirulina products available globally. There is extensive discussion of world food politics in general, spirulina’s resource advantages and experiments with growing spirulina in third world countries. The final chapter offers a comprehensive vision of how spirulina could be used to regreen the planet, end hunger and restore the biosystem. Earth Food Spirulina is now the definitive popular reference work about spirulina. Recommended.”